Andhra Pradesh Chief Minister N Chandrababu Naidu celebrated a tense 55th birthday on Tuesday even as the volatile Telangana region, facing a strong movement for a separate state, went to the polls along with the three north coastal Andhra districts in the first phase.

Naidu’s birthday turned out to be a low-key affair, with some school children visiting his residence at Jubilee Hills in the city and greeting him on the occasion.

He appealed to the people to shun ostentation in celebrating his birthday and instead less him with votes. His supporters placed big advertisements in local newspapers on the occasion, seeking votes for ruling Telugu Desam Party as the ‘biggest birthday gift’ for him.

Naidu and his wife Bhuvaneswari went to a nearby polling station and cast their votes. The chief minister later set out for campaigning in Guntur district, which goes to the polls in the second phase scheduled on April 26.

As the first phase polling began in 21 Lok Sabha constituencies comprising 147 assembly segments to elect representatives for the Parliament and the state assembly amid the tightest-ever security, the ruling party leaders are having testing time since they are facing the combined onslaught of the Congress-Telangana Rashtra Samithi alliance and the wrath of outlawed People’s War Naxalites.

The TRS is contesting its first general election on the plank of a separate Telangana state. The Congress has forged an alliance with the TRS in this backward region besides working out seat adjustments with the two left parties.

The TDP has an electoral alliance with the BJP. The three north coastal Andhra districts and the entire Telangana region, barring Hyderabad-Secunderabad, are affected by Naxalite activity.

In the twin cities of Hyderabad-Secunderabad, comprising 13 assembly segments falling under four Lok Sabha constituencies, polling started on a dull note at 7 am but gathered momentum later in the day.

At some places, the polling commenced a bit late as the Electronic Voting Machines developed technical snags.

Though the EVMs were used in the Hyderabad and Secunderabad parliamentary constituencies in 1999, too, this is the first time that these general election are held using EVMS in the entire state.

Special teams of technicians rushed to set right the machines before polling began.

The police made elaborate security arrangements for the first phase polls by deploying over 29,000 civil policemen, 8,000 armed policemen, 7,000 other security personnel, as well as 64 companies of Andhra Pradesh Special Police and 150 companies of central paramilitary forces.

Besides 2,783 mobile parties, 921 striking forces and 268 special striking forces have been pressed into service. Check posts were set up at 359 important places in the districts to prevent the movement of anti-social elements and carrying of deadly weapons. 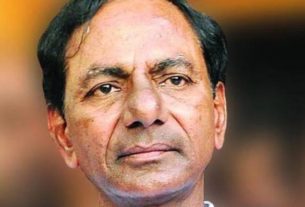