A dozen political parties from various parts of the country expressed support for a separate Telangana state at a rally organised by the Telangana Rashtra Samithi in Hyderabad on Saturday.

Interestingly, the Congress stayed away from the meeting. The TRS is a partner in the ruling coalition headed by the Congress at the Centre.

Four others — the Rashtriya Janata Dal, the Nationalist Congress Party, the Janata Dal (Secular) and the All India Muslim League — were represented by their state-level leaders. Bahujan Samaj Party president Mayawati sent a letter addressed to Prime Minister Dr Manmohan Singh in support of the Telangana state.

Thousands of people from all over the region turned up at the rally, demonstrating the popular support for a separate Telangana state.

Addressing the gathering, TRS founder and Union Minister for Labour and  Employment K Chandrasekhara Rao said Telangana will become a reality soon despite the opposition from some parties, particularly the Telugu Desam and the Left.

“Today’s [Saturday’s] rally in Hyderabad is the last public meeting before the formation of the new state. Next, we will organise Vijayotsavam (victory celebrations),” he said.

The TRS chief said the sub-committee formed by the United Progressive Alliance to go into the matter will evolve a political consensus and submit its report within a fortnight of its constitution.

Ajit Singh, Mehbooba Mufti and Ramadoss, in their speeches, said their parties favoured a Telangana state. MDMK’s Krishnan assured his party’s support in Parliament for a Bill on the creation of Telangana.

However, in what is seen as a snub, no senior Congress state leader turned up for the rally. Andhra Pradesh Congress Committee president K Keshav Rao and Congress deputy floor leader in the Lok Sabha G Venkatswamy were among the leaders invited to the meeting.

Majlis-e-Ittehaadul Muslimeen, which has its base in Hyderabad, was also conspicuous by its absence. The TRS had invited MIM Hyderabad MP Asaduddin Owaisi, but he stayed away, indicating that the party has still not made up its mind on Telangana, which has a Muslim population of 12 per cent.

The day started with KCR laying the foundation stone for ‘Telangana Bhavan’, the party headquarters in the posh Banjara Hills. The prime one-acre land was allotted to the party by the state government recently at a throwaway price.

The rally is being seen as an attempt by the party to build pressure on the Congress-led UPA to concede the demand for a Telangana state by bifurcating Andhra Pradesh.

The Telangana region comprises 10 districts that was once part of the erstwhile Nizam state.

The TRS had contested this year’s assembly and parliamentary elections in alliance with the Congress on the Telangana plank. It secured five Lok Sabha seats and 25 assembly seats. 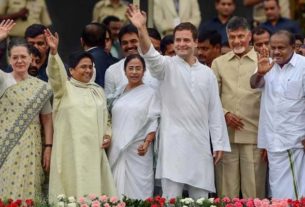 MAHAGADHBANDHAN OR FEDERAL FRONT IN MAKING?