Telangana Rashtra Samithi leader and Union Minister of State for Rural Development A Narendra on Sunday declared that he and TRS president and Union Minister for Labour K Chandrasekhar Rao will quit the United Progressive Alliance government on August 22.

In an informal chat with media-persons in Hyderabad, Narendra warned that TRS will intensify the movement for separate Telangana state after he and Chandrasekhar Rao submit their resignations to Prime Minister Manmohan Singh and other UPA constituents on August 22 evening at a dinner to be hosted by the prime minister for all the UPA partners.

“There will be polarization between the people from coastal Andhra/ Rayalaseema and Telangana after August 22 and God alone knows what will happen if the movement for separate Telangana turns violent,” he said, without mincing words.

“TRS has shown all the patience and tolerance at its command during the past two and a half years and now we will show our strength by intensifying the movement for separate Telangana state and this time, our struggle will surpass the one witnessed during 1969,” he added.

He announced that Chandrasekhar Rao would sit on hunger strike at Jantar Mantar in New Delhi on August 23 while he and other TRS parliamentarians, alongwith Bharatiya Janata Party members, will stall the Lok Sabha proceedings.

Simultaneously TRS legislators will bring the state assembly proceedings to a standstill by rushing towards the Speaker’s podium on that day, he added.

“The TRS plans to bring momentum in the movement by organizing a public meeting at Siddipet in the first week of September while another meeting will be held at Parkal in Warangal district,” he added.

Rejecting the statement of All India Congress Committee general secretary in charge of Andhra Pradesh affairs Digvijay Singh about obtaining the opinion of the people of Rayalaseema and Coastal Andhra also over the formation of separate Telangana state, he said that there was no need for seeking anybody’s opinion.

He said that TRS had anticipated that Congress could deceive the people of Telangana but by joining the UPA government, the party had given enough time to Congress for making its stand clear and gathering consensus on the issue.

“We will expose the true face of Congress before the people of Telangana and teach the ruling party a befitting lesson,” he declared. 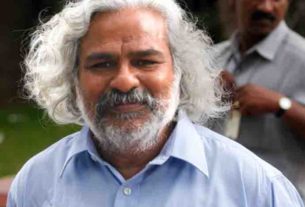